It was April and I was in Malaga for medical reasons. You see, the UK might offer economic opportunities and basic social freedoms, like allowing same-sex individuals snog in public places without fear of reprisals, if doesn’t offer sunshine. As a result  I have to top up my  Vitamin D levels periodically and my doctor in addition to prescribing Vitamin D supplements, suggested some time in the sun. So I booked a short  5 – day break in Malaga, Spain  with the sole intention of lying on the beach and getting some sun……well until I got distracted.

It was about 7pm on the third day of my trip. I had just returned from the gay  beach in Torremolinos, about 13 km away from Malaga. I had showered and was getting ready to go have dinner. I was looking forward to having some seafood Paella, which is a local delicacy.

A Grindr notification came up on my phone and I checked it.  It was from a guy I had seen earlier in the day at the beach. He was very fit and he looked like he stepped out of a fitness magazine. He stood about 5’10, had a handsome rugged face, with dark hair, sun kissed skin, and a muscular build with a pair of well developed glutes that were restrained by a pair of olive coloured swim trunks. The glutes caused an ever so slight stir in my loins.  He was playing beach tennis paddleball with a group of friends, but all eyes on the beach were on him. He was by far the hottest guy on the beach.

From our chat, he said he had seen me on the beach and wondered if we could meet up, as he was free from his friends for next couple of hours. Trouble was he was visiting from Madrid and staying with friends near the gay beach and had no means of transportation. He wondered if it would be possible for me to come and pick him up and drop him back afterwards.

On principle, I wouldn’t offer to pay for taxi fare for a shag or pick them up from their place to mine. I would instead go to theirs if they can accommodate or call the whole thing off. Its quite simple: We agree to have sex, we agree a time and place and it is up to each of us to get to the agreed location by their own means. I refuse to assist financially or otherwise, for a shag to come to me. What if I get there to pick them up or I pay for them to come to me and the ass pic they sent is a gross misrepresentation of the real thing? Nah!

I have friends who do it regularly and I chide them for it, like a Pentecostal church pastor admonishing his congregation for not paying tithes or making a special contribution to a “special” church project.

BUT I was on holiday, I left my principles (and congregation) back in London and more importantly, I had seen his ass and I knew what I would be getting into (pun intended). Before long I was in the hire car racing back to Torremolinos.

I was meant to pick him up near his friends’ place, but he wouldn’t give his phone number to call him in case I couldn’t find him. Instead he sent the approximate location where he would be waiting via Grindr. Strange. Alarm bells ringing. It could be a set up.  My mind went through a few scenarios as I was racing down the motorway to pick him up. Was one of his other friends his boyfriend and were they going to jump me? What if his boyfriend followed him and decided to attack me for trying to sleep with his man (some people are mad like that, they blame everyone else but their partner for sleeping around). 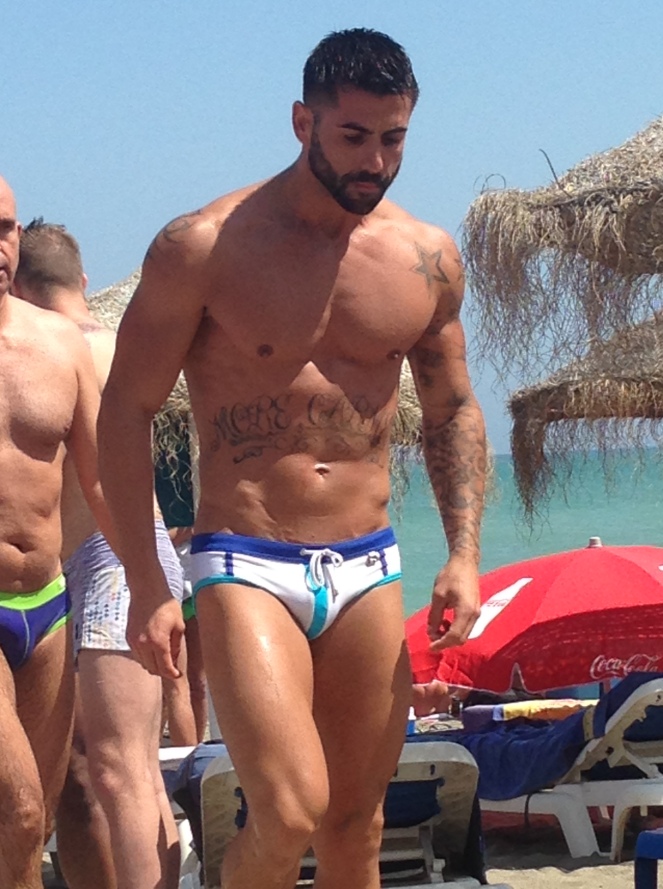 I felt like Jack Bauer in 24, using a tracking device to hunt down the bad guy.  The US announces some days ago, that there was a 99% certainty that they had killed Islamic State’s Jihadi John in a bombing raid in Syria. If they had used Grindrto track him, it would have been 100%.

Anyway, Gluteus Maximus successfully located and secured in the car, we raced back to Malaga to my hotel. Once in my room he quickly got comfortable while I poured us some water. He was stark naked except for a pair of white socks. I handed him his glass of water, took a sip of mine and stripped down as well, including my socks.

The guy was packing a nice sizeable cock all of 8 inches long with a sizeable girth. It stood erect, perpendicular to his beefy ripped body. It was straight, no kinks, no bending to the left or right or slightly elevated or depressed, just straight.  The type of dick you pull down and  release and it springs back up like a diving board. This is what he did a few times and it rebounded off his ripped six pack with a smacking thud. Show off.

I stepped forward and grabbed hold of it and ran my hand gently up and down his rigid shaft. At the same time we began to kiss, tentatively at first then soon our  tongues were fighting like two musketeers  in a sword fight, in each other’s mouth. I retrieved my tongue from his mouth and got on my knees. I ran the tip of my tongue around the crown of his dick a few times before engulfing the rest of his dick in my mouth. He let out a deep moan, his sinewy thighs quaked and he laid on the bed. I got off my knees and got on the bed alongside him. I played with his cock a bit more, then I asked him to lie on his stomach. I took in the view of his wide lats which tapered into his narrow lower back, continued down to his butt cheeks which rose up high, like a couple of perfectly formed hills rising over a flat landscape. It was a sight to behold.

He was now on all fours and was eager for me to enter him one way or another. I reached for the condom on the bedside table and put it on. Next I reached for the bottle of lubricant and generously applied some on my now sheathed dick. I also put a generous amount on 2 fingers and probed his asshole. He did not flinch. I took my fingers out, added more lube this time to three fingers and inserted them. He flinched a tiny bit. He squeezed his rectal muscles around my fingers and released it. He was ready. I got into position behind him and gently guided my cock into his ass. It felt tight and I paused  for his rectal muscles to get used to my girth.

I didn’t have to wait for long he started pulling his ass away from me and slowly pushing back towards me along the length of my dick. Taking my cue from him, I started rocking back and forth to meet his butt cheeks somewhere in the middle.  He increased the pace as he moved to meet my own rocking motion, I slapped his butt after every other three strokes or so, which he seemed to enjoy; but to be honest because of his firm butt muscle, it hurt me more than it pleasured him.

About 15mins later I felt I was reaching the peak.  I gripped his glutes firmly and stopped him, I pulled out and suggested we changed position. He got off the bed and went over to  the dressing table and bent over it in front of the mirror using his hands for support.  I took the lube over to him, moved his legs a bit wider apart and applied some more lube between his butt cheeks and lubed myself up some more.  I entered him and we started fucking again with me hitting it from every angle. I think he liked watching himself getting fucked in front of a mirror and I must admit it was pretty hot .

He grabbed hold of his dick and wanked away furiously as I continued slamming him from behind. Then his muscles stiffened and he squeezed his glutes forcing his rectal muscles to contract and tightened its grip on my dick. I looked at his face in the mirror and what I saw made me stop mid stroke. His face appeared to be contorted as if he was doing a gurn. Then as he wanked harder, his face changed shape – now it looked like the left side of his face was pulling downwards towards the floor. He reminded me of  Sylvester Stallone in the movie Rocky ,at the end of the last boxing match . This was his ‘cum face’. The face shape-shifting was scary as well as hilarious.  I barely covered my mouth with my hand as I tried to stifle a laugh. I needn’t have bothered hiding my amusement because as he was busy making his cum face he didn’t notice that I had stopped and he kept bucking back and forth along my dick.  Then he left out a loud long grunt like, he was lifting heavy weights on the last repetition at the end of an exercise set, then he exploded all over the dressing table.

We cleaned up and I drop him back at the pick up point in Torremolinos. I raced back to Malaga to get some Paella.

28 thoughts on “Sex In Malaga”