I am by no means as fit as I supposedly look. I know this, but the obstinate, boundary pushing and arse loving “I” decided to test this out yesterday.

I am in Rio de Janeiro, Brazil for a week and I am staying in an apartment in Copacabana, on the beachfront by Posto 5 (Postos are lifeguard posts along the beach and there is one every 500m or so)

Each morning the Cariocas (Rio Residents) go jogging along Copacabana to Ipanema. It is about a total distance of 15km.  They take this activity seriously, because there is a jogging track the entire distance along the highway.  And every kilometre or so, is an outdoor gym where you can stop and do some stretches or do some press-ups and pull-ups.

I have seen a good number of hot guys jogging along the route and doing some exercises at the out door gyms. It can be nice to watch, especially when they do it in their swimming trunks. 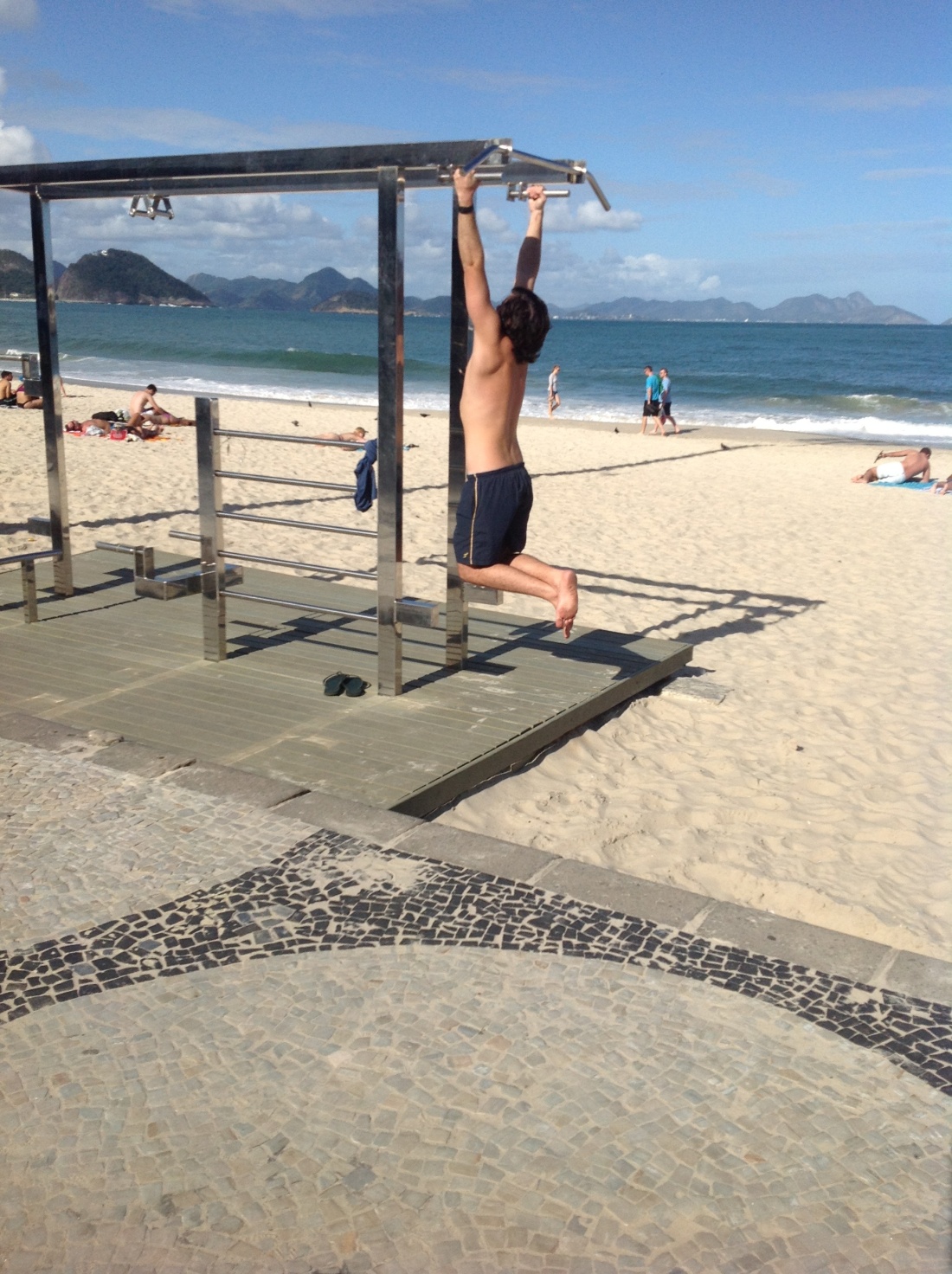 Last time I went jogging was about 8 years ago in London. Other than that I usually do a half-hearted 5 min warm up run on the treadmill in the gym, before my work out.

Thinking I was in reasonable shape, I decided yesterday to join the Cariocas in their daily morning ritual.  The temperature was 22ºC, which to me was heaven but to the Cariocas it was cold.  Most people were jogging with tops on. They are used to temperatures in the mid -20s and above at that time in the morning.   So sadly eye candy  population would be reduced.

I began jogging from Posto 5.  My plan was to take it easy and maybe do 2.5km  to Posto 8 in Ipanema.  As soon as I started in the near horizon I caught sight of a guy with his top off. He was about 15 meters ahead of me.  It looked like he had a muscular back firm legs and a nice round arse. I believed he would have a six pack and nice pecs.

Maintaining or decreasing the distance between us was difficult. The heat was getting to me and I started sweating profusely and I did not think of carrying any water or money to get some, as I did not plan to run far. But I kept chasing this round ass. All sorts of improper thoughts were running through my head, imagining what I could do with it. These thoughts kept me going.

After about 20 mins, my heart was racing, I was panting and way out of breathe but still running at a fast pace, I took in my surroundings and realised, I was now at Ipanema beach and had gone past my target – Postos 8. I was at Postos 9. The round arse also seemed to be slowing down.

As I gained on him, his round arse got flatter and flatter.  I  was a bit confused. The heat must have affected my vision as it looked like I was seeing something that was not there all along. Similar to a mirage in a hot desert.

I am not sure what happened next, but I like to think I was exhausted from running so hard and the dehydration from the heat and not the shock from the realisation that the hot carioca I was following was a flat arsed man in his fifties with a pot belly – for I blacked out and took a tumble at Postos 10……….

6 thoughts on “Chasing A Fine Arse in Rio”